Traditional power plants are designed with centrally controlled power plants that have a large inertial response. Renewable energy, however, is independently controlled and intermittent in nature. Hence, adapting the smart grid to include renewable generation sources, improving its energy delivery and efficiency, enhancing and maintaining its power reliability and quality, and ensure power availability with self-healing principles have emerged as the important cornerstones for the future smart grid renewable integration studies. It is common knowledge that synchronous generators are capable of riding through system disturbances in order to maintain the grid voltage and frequency at desired levels.

However, renewable energy, especially solar Photovoltaic (PV), is now a key contributor to our society’s dynamic energy needs, but their integration into the power grid poses significant technical challenges. As the penetration levels of PV increases, especially into the distribution grid network, its intermittency causes power quality and voltage fluctuation issues, among others. The impact of PV integration into the smart grid at a particular feeder decreases with the increase in its distance from the distribution substation from which the feeder originates. Some critical power quality concerns are: 1) Voltage, frequency and power fluctuations at the point of interconnection caused by the intermittencies in PV generation that is, in-turn, dependent on local weather conditions; and 2) Harmonics introduced by power electronic devices utilized in renewable energy generation under high penetration levels. Additionally, voltage fluctuations could be observed in the form of: 1) Overvoltage scenarios where the maximum feeder voltage exceeds the threshold stipulated by grid codes and standards such as IEEE 1547 and UL 1741; and 2) Significant voltage deviations observed which surpass the recommended limits of 3% at the primary and 5% at the secondary. These changes cause the voltage regulators to undergo switching operations, which could be further aggravated when the plant’s smart inverters operate in control modes such as Volt/VAr instead of unity power factor. More frequently changing operations reduces the life of regulators, and makes them less efficient in the longer run. 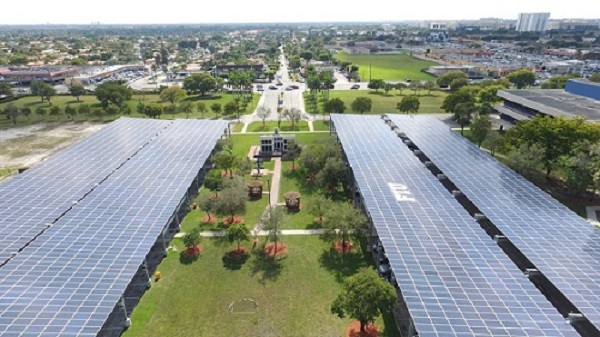