The EPS team has been prolific in publishing their results with multiple best paper and most cited awards (see Publication tab).

The EPS team is one of the few to receive two grants from NSF on smart cities. EPS supports (Dr. Sarwat as the co-lead) the newly launched Masters in Energy & Cybersecurity education program. The EPS team of students includes 10 Ph.D., 04 Masters, 1 Postdoctoral researcher, more than 20 undergraduate students and multitudes of volunteers belonging to different colleges at the FIU.

The intelligence based 3MW/ 9MWh Battery Energy Storage System is being installed at the North-East corner of the FIU Engineering Center (EC). This energy storage system has a flexibility to operate in both islanded and grid-connected modes using a centralized controller. Please click here to read more on this. 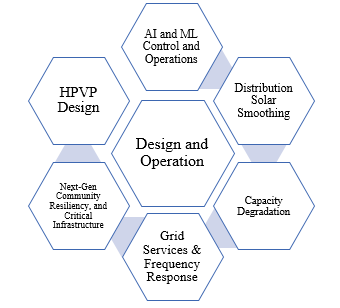 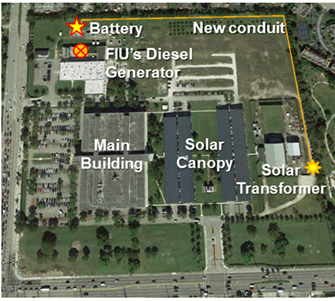 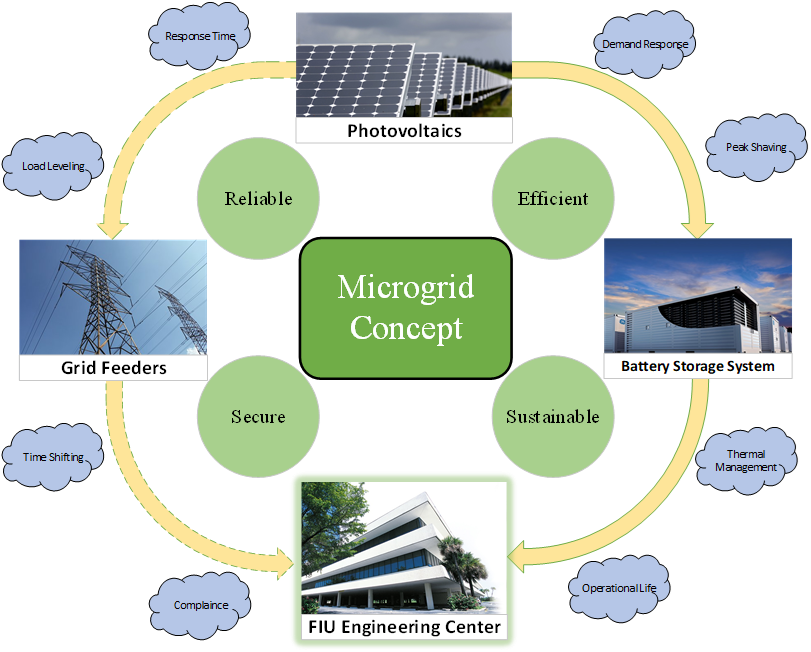 EPS has a long-standing partnership on renewable integration and research with FPL NextEra Energy and takes pride in being their primary research partner. FPL, the largest renewable installer in the world is also becoming America’s largest producer of solar energy among electric companies and further advances affordable, clean and reliable energy for all Floridians. FIU and FPL have joined hands to conduct research on the impact of high penetration RESs in reliability, stability and other pertinent issues of the distribution network. At the FIU-FPL Solar Research Center, Dr. Sarwat is driving efforts to maximizing the benefits from this unique collaborative opportunity. The collaboration with FPL is an investment of EPS group in transferring the research efforts into applications for industries and communities. 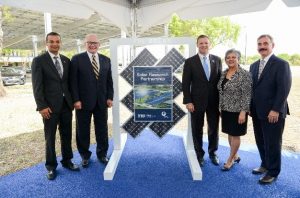 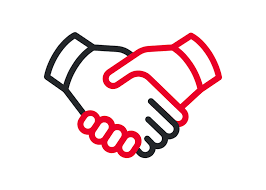 PANDORAS lab is equipped with high-end computer systems which are utilized to conduct research activities related to smart grid data, weather data, and telecommunications data. The lab is equipped with a large capacity data server, ten high powered workstations, a GPU server for accelerated machine learning, and a multi-panel wall screen for monitoring. These resources are applied in the development of the cyber security software, data synthesis, and grid edge analysis. The FPL/EPS partnership enables unique research through PANDORAS by the provision of real-world smart meter datasets along with the power grid topology.  Furthermore, the lab is equipped with the actual capabilities of Advanced Distribution Management Systems (ADMS) as used by the utility.

Genie lab is a state-of-the-art Control Room for AI-Renewable Microgrid and hardware-in-the-loop real-time simulations. GENIE Lab houses OPAL-RT, and LabVolt simulators along with the InTouch Wonderware system, thereby providing the capability to test, simulate, and validate inverters, batteries and other grid-based equipment

AI-RM-VPP Research Project is funded by FPL/NextEra and leading the effort is Dr. Arif Sarwat (Principle Investigator – PI). FPL team is led by Ms. Stevany Cole (Project Manager). The effort involves many leaders from both organizations (FIU and FPL) that have poured their resources to construct and provide one of the most modern grid services frameworks and learning facility to the south Florida community.

The North-East corner of FIU Engineering Center (EC) (with total area < 26,000 sq. ft.) is being utilized for installation of the large-scale energy storage (battery) system with underground conduit of approximately 1800 feet connecting the battery site with the solar PV site. Site construction is being led by Ms. Natalie Chu (Site Manager) from NextEra Energy Resources. (3)

If you have any questions, concerns or comments about the project, please feel free to contact us directly through e-mail or follow this link.

Cybersecurity is enforced through numerous technology standards that implement secure computing practice; however, the human aspect is typically overlooked in the standards. With humans as an inevitable part of the cybersecurity pipeline responsible for decision-making and timely action to mitigate damages, it is vital to reduce the excessive amounts of non-contextual information that overwhelm the human users such as security analysts and engineers. To address the human behavioral aspect of cybersecurity EPS is active in researching and developing tools to be deployed at command and control centers which augment data logs with data mining, malicious event detection, contextual visualizations, and contingency response guidance systems. These developments protect hardware assets, making systems less susceptible to cyber threats if a cyber attack occurs. To learn more about the cybersecurity research at EPS visit: https://eps.fiu.edu/doe-seeds-tri-modular-framework-for-intelligent-visualization-of-smart-grid-cyber-attacks/

The conventional electric power grid is experiencing an immense transformation over its entire spectrum of generation, transmission, and distribution through the application of numerous smart-grid actions. For ensuring secure, reliable, and economical operation of the bulk power system, resilience and cybersecurity is critically important. The bulk power grid security, reliability, and resiliency rely heavily on the security of measurements and control commands transmitted over wide-area communication networks for real-time operational, protection, and control functions which are vulnerable to various threats. In order to address the resiliency and security issues, EPS is actively conducting research on this field and developing tools based on artificial intelligence, probabilistic estimation and machine learning, and other powerful mathematical tools such as graph theory, game theory, optimization, and other related frameworks that would provide adequate situational awareness to securely and reliably operate the grid. These developments will contribute in advancing the resilient system of power grid which would assist the grid to recover from the failures within a very short period of time and  make the bulk system less susceptible to any kind of disturbances and natural events.

Dr. Sarwat’s work has resulted in multiple patents and patent filings. The following is a list of major patents recently awarded to EPS team.

Numerous industries have partnered with Dr. Sarwat for his state of art research which have led him to develop game changing products in advanced technical areas. These entities work closely with Dr. Sarwat to materialize his vision and bring life to the technology he has developed at EPS.

FPL is the largest power utility company under Next Era Energy, and they serve approximately 10 million people throughout Florida. Their reliable generation, transmission, and distribution of electrical energy throughout the state keeps Florida working and satisfied with high reliability and rapid response to disturbance. The integration of advanced battery systems into their grid is enabling improved solar PV generation adoption into the power grid in Florida, making FPL/NextEra renewable energy leaders.

FPL/ NextEra has funded more than $10M to Dr. Sarwat’s efforts with the industry: 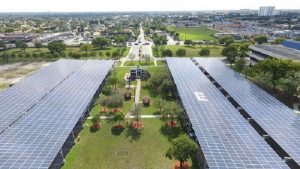 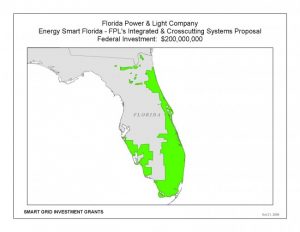 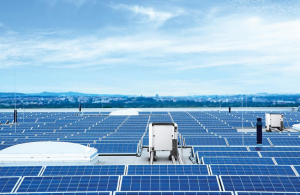 FPL-FIU Solar Research Center- EPS received a $7.65 million collaborative project with the FPL as part of which high-end research that is conducted on many aspects of large-scale PV integration into the smart grid. As part of this project, a 1.41MW solar PV power plant has been commissioned and is currently live, generating power, at the Engineering Center, since May 2016. Dr. Sarwat serves as the Director for FPL-FIU Solar Research Center. Furthermore, EPS has access to 3MW distributed solar generation in Daytona. Real-time data of a wide range of parameters including solar irradiance, temperature, wind speed, humidity, and 46 smart PV inverters is continuously being collected and transferred to the Command and Control Center located at the Engineering Center campus under Dr. Sarwat’s supervision. 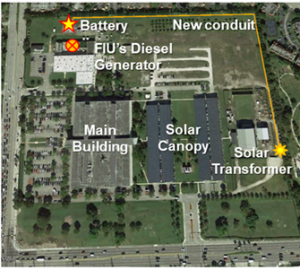 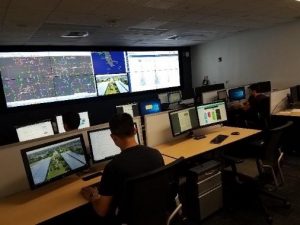 More than 50 students have graduated under Dr. Sarwat and each graduated student is hired at a top company which include the likes of National Renewable Energy Laboratory, Applied Physics Laboratory – Johns Hopkins University, Florida Power & Light, WSP USA, GEIRINA, Acuity Brands, and Quest Global. Many EPS students, including researchers at the undergraduate and graduate levels perform internships with various industry partners and many join with FPL/NextEra. FPL/NextEra has become FIU college of Engineering’s largest hiring source thanks to Dr. Sarwat.

Aditya Sundararajan pursued his Master’s and Ph.D. at the Energy, Power & Sustainability (EPS) Group in FIU’s ECE department.Under the mentorship of Dr. Sarwat, Aditya published his research in renowned journals and conference proceedings during the course of his degrees on machine learning, artificial intelligence and data analytics for challenges in smart grid situation awareness and renewable integration. Aditya  has joined Oak-Ridge National Lab as a R&D associate staff member.

Yemeserach Mekonnen received her Ph.D. in Electrical and Computer Engineering at Florida International University. She was the recipient of the McKnight Doctoral Fellowship and NSF Bridge to the Doctorate Fellowship. Yemeserach has interned with NASA Johnson Space Center under the Human Research Directory as a space system hardware engineer. She has also interned as an electrical engineer with The Aerospace Corporation in El Segundo, CA, supporting the Electronics and Power system and Civil and Commercial group. Yemeserach has joined Applied Physics Laboratory – Johns Hopkins University after the graduation.

Avinash Jeewani joined the EPS in Fall 2018 as a Master’s student . He started to work on cybersecurity solutions with a smart grid and further expanding his domain to simulation and synthetic data for critical infrastructure, reliability analysis of grid system, renewable energy generation predictions and gaining some knowledge in Power Systems. Environment and structure at the EPS helped a lot in learning with high-tech systems and the availability of huge datasets.He joined AICINEXT as a Machine Learning Engineer.

Jonathan Sarochar graduated with a Bachelor’s of Science in Electrical Engineering from FIU in Fall’2019. His journey  at EPS  led to his first published research led him to delve into areas such as data mining, machine learning, Python, familiarity with utility ADMS software, smart city structure and utility roles, and more—all relevant, practical skills which ultimately secured him a position in the industry. He is currently pursuing a part-time Masters in Computer Engineering under the mentorship of Dr. Arif Sarwat. He is also working at FPL.

Juan Sanfiel has been a member of the EPS Lab since January 2018 as an undergraduate. During his time as an undergraduate he has been working on a bidirectional charging module for electric vehicles. Juan is continuing his studies, pursuing a Master’s Degree while working in the EPS lab. His research interests are renewable energy and power generation/distribution. 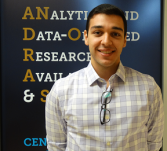 Alexander Hernandez received his Bachelor’s degree in Biology and Chemistry at FIU. He worked as a Graduate Research Assistant pursuing his M.S in Electrical Engineering, while under the supervision of Dr. Sarwat. His research involved battery management systems, and their application on various energy storage devices. He has experience in embedded systems and C/C++ programming languages. He is interested in the field of batteries, especially in large scale applications for electric vehicles and grid related infrastructure. Currently he is undecided between a potential job opportunity or to continue his PhD.

We have three dedicated labs for research and testing purposes. Access to data, state-of-art software and cloud-based data management server allows for effective analytics and predictive modeling.The Center for Proactive Analytics and Data-Oriented Research on Availability & Security (PANDORAS) shown in is equipped with multicore central and general-purpose graphical processing units (GP-GPUs) integrated over a secure, isolated network. The EPS has a prototype of 9-bus test-bed system from LabVolt integrated with PV characteristics. EPS conducts processing at all levels- descriptive, diagnostic, predictive, prescriptive, and cognitive- to understand and offer actionable insights into different scenarios of the grid in near real-time. Such processing models will help the utilities with planning and decision-making at their command and control centers as well. 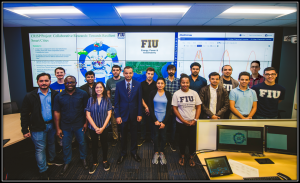 EPS is determined to break new grounds in research, education, and power distribution by bringing a wide-ranging approach into the way energy is produced and delivered. EPS lab is aspiring to bring clean, efficient, reliable, sustainable, and safe energy solutions to its clients.